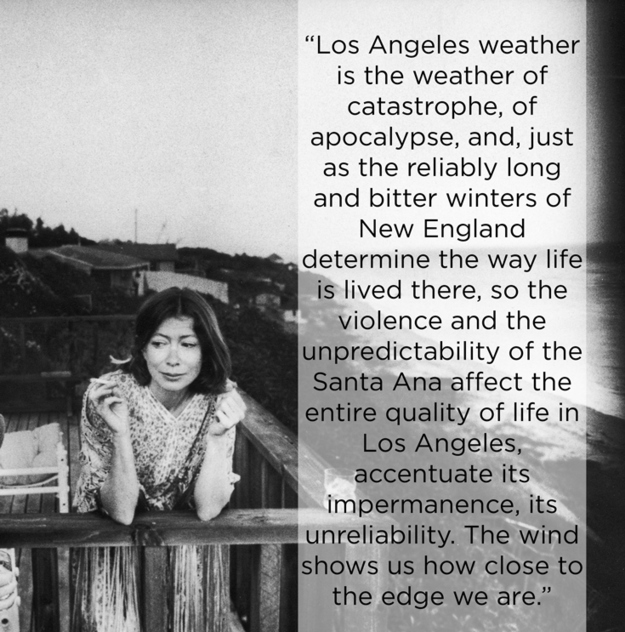 Incoming fan mail: Dear Joan Didion, the only woman presented me in this good ole’ boy’s club called “The New Journalism.” Having read three books into this “genre” I grow anxious straining to find some diversity among the new journalists. Many of you have whispered about social ills in your work. There’s also a little whispering about justice (or the lack of it). Phrases like “Observer” and “fly on the wall” have been used to describe you, but this detachment often makes me uneasy. In part, I have a desire to trust the voices I’ve heard thus far, and yet without the diversity I find that hard. I picture you (new journalists) so close to each other in opinion, culture, and existential comfort that you sound a little like a chorus of elevator music; ambient, but not obtrusive.

I’ve enjoyed your creative nonfiction. Some of the stories have stuck with me uncomfortably no less, especially “Slouching Towards Bethlehem”; a horrific stickiness like fly paper that I’d thwack, even at risk to myself, to remove. I think more than any other story I’ve read from this genre, detachment here, is not possible. The places, characters, and emotions are crafted to make the story a compelling argument for social action. Yet, when I look at your fellow writers, even you Joan, I notice everyone goes home at the end of the day. You, to beautiful Malibu beach, Capote to a cadre of celebrity pals, Talese to an insanely tolerant wife, and miscellaneous others, namely, Wolfe, Plimpton and the Paris Review crowd, etcetera, to their respective lives of comfort. Granted, action and social justice might come, through you (collectively) raising the consciousness of your readership, but then again maybe not. So, when does it become your responsibility to not just observe and report, but to intervene and actively facilitate change? The “you” is universal in the following, but I loath to ask, “Did you do anything other than write about the physically raped teens–were they rescued? And the mentally raped teens—did you help them escape their abuse? Did you do more than write about the ‘High Kindergarten,’ or the toddler curiously licking her lips, or the rocking-horse rider fried by the electrical cord?” These children, if they’ve survived, are my generational peers and together we’ve gone 360 on parental culpability—no doubt a result of this.

I credit you for allowing us to brace ourselves for the worst, “It was not a country in open revolution. It was not a country under siege. It was the United States of America…San Francisco was where the social hemorrhaging was showing up. San Francisco was where the missing children were gathering and calling themselves ‘hippies’.” You do well channeling Yeats, “…what rough beast, its hour come round at last, slouches towards Bethlehem to be born?” An omen of grim uncertainty born out of chaos.

From my first googled word, “aphasic,” to my last, “Antabuse,” your scholarship shined through. Never was it more evident than when you revealed a little about yourself in “Personals: On Self Respect.” Some of the references were drawn out, even convoluted, some pontifications–belabored, and the characters throughout this part were a bit strenuous to follow, but I stuck with you, rereading here and there for understanding. Okay, I get Jordan Baker from “Gatsby,” Julian English from “Appointment in Samarra” (a bit more obscure)…but Raskolnikov, the Dostoyevskyan reference? Really? You are the smartest girl in class. That kind of engagement throughout a read always makes me feel good about the effort I’ve expended just in keeping up, and all the while makes me feel good about you too. Thank you for closing each story with the year and not assuming I’ll extrapolate it from the setting and its characters. Your presence among the “new journalists” added credence to the lot. However, I suspect you can’t be this genre’s only face of diversity, so I’m on a quest to find you company.