Hunter, Hunter, Hunter…boy, what the hell was you thinkin’?!?  My question can apply to both the story (which for me was a head scratcher) and the personal choices (tragedy to the comedy for which Hunter S. Thompson is over reaching). 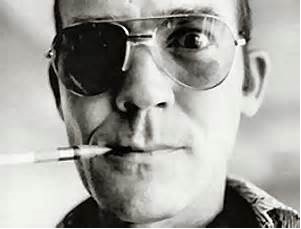 Let’s start with the story… I was hard pressed to accept this as non-fiction let alone insightful social commentary.  You either love this kind of drug driven juvenile antics stuff or you don’t.  In all fairness, it might just be me, but I don’t.  Some of my classmates immediately latched onto the humor that I found absent, but then I never got the humor of Cheech and Chong, Harold and Kumar, or Beavis and Butt-Head; all of whom managed sequels of some sort.  I can’t even say that it’s generational.  I just never could connect substance abuse of any kind and humor.  W.C. Fields didn’t do a thing for me either.

So, here’s where I find google, our class discussions, and my classmates’ presentations invaluable.  Learning the backstory to Hunter S. Thompson’s Fear and Loathing allowed my forbearance with his style and even resurrected his chances to impress me a little.  I could see his cleverness that was completely lost on me with my first pass through his story.  When I let go of that “Creative Nonfiction” box I held him in, I could understand his irony.  I wanted to learn more about Oscar Zeta Acosta and read Autobiography of a Brown Buffalo. After settling for the synopsis I learned the whole Samoan thing described by Acosta was an inside joke.  He and Thompson obviously got a lot of traction out of this because Thomson co-opts “Samoan” and inserts a lot more as subterfuge.  He didn’t just pull it out of his @#s!  I see what he did there…change the names to protect the innocent (term used loosely), change the attorney’s ethnicity, change the venue.  Oh, what the hell, change the story!  In fact, was there interspersed between any of their drunken repartee, serious talk about the Chicano movement?  Was there any “fact”?

That brings me to the personal choices… Considering the amount of snortin’, huffin’, sippin’, tippin’, and bluffin’ going on, you gotta figure dysfunction was the bigger story.  You would think that if he wasn’t bluffing, the sheer quantity of drugs and alcohol would have done him in.  Perhaps in a roundabout way this does explain his suicide.  Many accounts say he was not aging well, was in constant chronic pain, and loathed being physically limited.  He had, up until midlife, taken for granted his natural athleticism and high tolerance for consumption.  Some close friends of Thompson knew suicide might be his final go-to drug—the ultimate anesthesia.  It’s not surprising in light of so many of his earlier choices bordering on a death wish.

“He (Thompson) told me 25 years ago that he would feel real trapped if he didn’t know that he could commit suicide at any moment.”1 Four days before his death it is said Thompson wrote, “No More Games. No More Bombs. No More Walking. No More Fun. No More Swimming. 67. That is 17 years past 50. 17 more than I needed or wanted. Boring. I am always bitchy. No Fun — for anybody. 67. You are getting Greedy. Act your old age. Relax — This won’t hurt.”2

Thompson, the rebel ‘til the end, was writing a piece that supposed explosives were used to bring down the twin towers on 9/11.  It was in his nature to poke the beast and he had a history of this—Bush and his political machine were just the latest in a succession of those vilified by Thompson.  You might argue that Thompson lived for stories into which he could throw some loathing.”Bush is really the evil one here and it is more than just him. We are the Nazis in this game and I don’t like it. I am embarrassed and I am pissed off. I mean to say something. I think a lot of people in this country agree with me…we’ll see what happens to me if I get my head cut off next week — it is always unknown or bushy-haired strangers who commit suicide right afterwards with no witnesses.”3

Suicided: murdered in a way that is made to look like a suicide.

The night before his death, Hunter told a friend, “They’re gonna make it look like suicide.  I know how those bastards think.”  So, was there fear of this in Hunter S. Thompson?  Loathing without a doubt, but the Gonzo in him was fearless to the point of self-destruction.  If we’re to believe he was “suicided”, then this fearlessness, passion and irreverence must have made somebody more than afraid.

_______
Endnotes:
1  A quote from Thompson’s friend, Ralph Steadman (Steadman illustrated Fear and Loathing.)
2  This was titled, Football Season Is Over, and later published by Rolling Stone Magazine.
3  January 2003, Thompson is quoted from an interview on KDNK radio (Colorado)

One thought on “Fearlessness and Loathing”