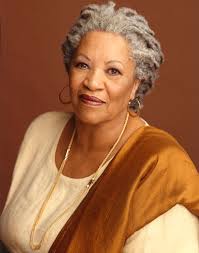 Wow! My first read of Toni Morrison, and it did not disappoint. It was powerful and weighted–normally I’d brace myself for a read like this before jumping in. So, ignorance is bliss, and I jumped, committing to finishing the book in three days.

Subjects addressed in The Bluest Eye…race, class, and economics, within the black community and the same juxtaposed outside it. Morrison lyrically framed an irony in our existential experience. We’ve tried co-opting it by owning insults originally designed to demean us in order to remove the sting that was their intent, only to stumble upon them like children running with scissors. This is apparent in the phrases heard when I was younger, the ones my mother endearingly used with the caveat, “I’m just preparing you for what you’re bound to hear”, the phrases teenagers use too casually these days, and the phrases Morrison’s characters use as a natural part of their setting. However, Morrison has artfully taken this along with self-sabotaging notions we often take for granted and scrutinized their deleterious effect. She’s revealed the sinister destruction we can wield on ourselves and she does this through the main character of Pecola, whom she paints in a hostile setting rife with dysfunction.

I would deem this book required reading in any American Social Studies class because of the vivid picture it paints of how we are still overcoming outside influences we internalized generations ago. This said, it should also be a book the well-read must experience because the subjects within it are universally relevant.

14 thoughts on “The Bluest Eye”