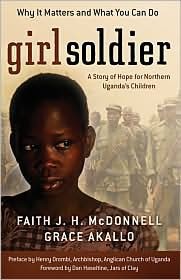 There are times when a message is greater than its literary medium, and this is one of them.  With that said, I’d recommend this book as a springboard for its message and not so much for its literary prowess.  Consider it an entrée for author Grace Akallo to speak to a global audience about the terror Joseph Kony is waging in Uganda and Southern Sudan.  I think her public speaking is much more compelling when it comes to addressing the line above the title of her book, “Why it Matters and What You Can Do.”  Because of this, I’ve included a video of her at the end of this post, and encourage you to google her actions as a positive change agent in this fight.

Grace Akallo’s message is one of hope for Northern Uganda’s Children.  However, before that message is broached we read about a seemingly hopeless seven month ordeal in which Grace is kidnapped by the Lord’s Resistance Army, or LRA.  The LRA, headed by Joseph Kony, created soldiers of stolen children from Northern Uganda’s Acholi villages.  Uganda had a legacy of powerful rulers using the faithful as political pawns and spinning Christianity for political expedience.  The Lord’s Resistance Army and the Holy Spirit Mobile Force were oxymoronic titles for terrorist groups. Although the irony should be evident, Girl Soldier shines a light on the absurdity of religious references with citations from many sources, including the following quote from journalist, J. Carter Johnson, who says,

…the Lord’s Resistance Army’s continued existence “is to perpetuate the power of its leader.”

“Perhaps the greatest atrocity is teaching these children [girl soldiers] that they spread this carnage by the power of the Holy Spirit to purify the unrepentant,’ twisting Christianity into a religion of horror to their victims.”

Grace recounts how young girls were terrorized and then forced to fight under Kony who was Idi Amin’s successor in a Uganda railing from post-colonial fallout.  She describes being buried alive, surviving near-death by starvation, suicide attempts, the unspeakable horror of being forced to kill and maim or witness the same, sexual assault, and the degradation of being given to an appointed bush husband many times her age.  Of course Grace is the voice of every young girl and countless child victims of Uganda’s ongoing war in which many were exploited even as they sought refuge in government provided internally displaced persons or IDP camps.

I can’t be more emphatic about Grace’s story needing to be told.  Writer, Faith J. H. McDonnell, partners with her to make this possible.  They follow a format where Grace writes a chapter usually a page or two that makes her experience tangible and revisits her emotional ride from shock and revulsion, to survivor’s guilt.  Then Faith follows up with a chapter that details the politics and people catalytic to Grace’s story.  Faith covers the history of Uganda which is tortuously convoluted.  I resorted to building a timeline with an online app, just so that I could follow the dates and characters mentioned; from the White Fathers-Society of Missionaries in 1879, through Ugandan independence in 1962 and the travails brought on by Idi Amin Dada, Alice Auma Lakwena, and Joseph Kony thereafter.  Faith’s chapters are longer than Grace’s, and read like a history lesson told by a Sunday school catechist.  Her editorial inserts are heavy-handed to the point that they detract from the telling of Grace’s story.  While Grace’s writing is good, it struggles to be better, and might achieve greatness with some editing.  Faith, on the other hand, comes to this book as a published journalist and contributor to the right leaning Breitbart News.  Much about her writing speaks “agenda,” and she sometimes offers prayer solutions where secular solutions are needed.  Girl Soldier is Grace’s story, but the chapters Faith has contributed seem to co-opt this a little.  While Faith’s chapters support the story Grace tells, they do so without any attempt to make adjustments for continuity of writing style or balance of content.  In fact, the last two chapters of the book are written entirely by Faith and read like a charity fund drive.  That’s why, even though I get where it’s going, I have reservations about this book being the ideal medium to carry Grace’s message.

In the end, Girl Soldier, published in 2007, serves its purpose as a springboard for Grace to become an internationally credible spokesperson for the exploited girls, now women, of Uganda.  She received an invitation to speak to Amnesty International, and then Oprah, and described both opportunities as instrumental in giving kidnapped Ugandan girl soldiers an audience worldwide.  Grace writes,

I was determined to speak to anyone who would listen and might help.  On April 16, 2004, I spoke earnestly at the [Amnesty International] meeting, as if the lives of my friends depended on the outcome of that one speech.  I was determined not to cry but to pour everything out.

Two days later, I flew to Chicago to be on the Oprah Winfrey show on television…My new journey to represent the children of war had begun.

Grace’s good work continues, and in that there is much hope. Google her online and see her speaking here in this video filmed by UNICEF: