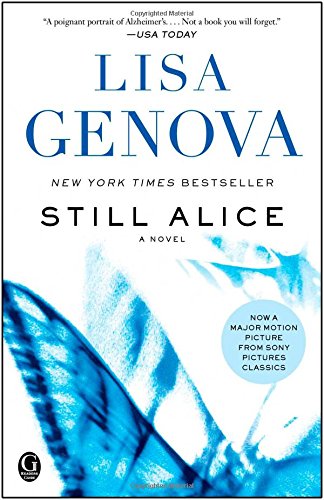 In Lisa Genova’s extraordinary New York Times bestselling novel, Alice Howland, an accomplished professor diagnosed with Alzheimer’s disease learns that her worth is comprised of more than her ability to remember.

Alice is proud of the life she worked so hard to build. At fifty years old, she’s a cognitive psychology professor at Harvard and a world-renowned expert in linguistics with a successful husband and three grown children. When she becomes increasingly disoriented and forgetful, a tragic diagnosis changes her life—and her relationship with her family and the world—forever.

At once beautiful and terrifying, Still Alice is a moving and vivid depiction of life with early-onset Alzheimer’s disease that is as compelling as A Beautiful Mind and as unforgettable as Ordinary People.

—a compilation of the synopsis from the book jacket of Still Alice and of amazon.com

I didn’t review this book immediately after reading it.  I was just so overcome with its content, and the fact that I was at that time witnessing the demise of my aunt to Alzheimer’s.  This made it imminently challenging for me to approach this review. However, it’s been a year now and my aunt has since died.  In some ways she died twice, first she seemed to die mentally, no longer able to connect with me verbally or visually—looking through me and no longer at me; and then, almost a year and a half later, she died physically—that day was noted on her death certificate.

I read Lisa Genova’s book, Still Alice, while observing my aunt’s first death.  The read was resonant in many ways, but mostly in that it validated my feelings of loss and the fear of abandoning a life’s trajectory, hers and mine, to honor the present.  So, you could say I loved the book, and my crocodile tear stains on its pages were a testament to that love.  The conflict between the characters was real, their dialog and emotions were real; in fact, the only thing to take me from the reality of Still Alice, was socio-economics.  By using scene and setting, author, Lisa Genova placed Alice and her almost idyllic family in the socio-economic minority—a minority with adequate financial means to deal with this devastating disease.  While raising Alzheimer’s awareness, Still Alice, unintentionally raised the fact that there are gaping social inequities in how we care for Alzheimer’s patients.

In the end, Alice, although I love the romanticism and emotion surrounding her, was not indicative of the many that suffer from being priced out of care.

Genova closes the story with Alice’s youngest daughter, Lydia, stepping into the role of caregiver.  The book implies that Lydia, an actress, will pursue her career in New York where her father has relocated.  Still Alice ends on this note, but all of us who have been through relocating a loved one with Alzheimer’s knows Alice’s husband and daughter will soon need help, especially seeing that both of them will be working.  The 2015 Alzheimer’s Disease Facts and Figures report revealed that in 2014, eighteen billion hours of unpaid care was given to patients by family members, the cost of which is almost impossible to gauge.  In the interim between the diagnosis and 24/7 care, families depend on friends, neighbors, and in home help who must be paid out-of-pocket, such as housekeepers or “babysitters.”  Families that can’t afford this are obviously at a loss.

In a year, give or take, when Alice’s daughter gets an acting role, she and her father will have to devise a contingency plan for Alice’s care.  I know this is less than romantic when compared to Genova’s masterfully written scenes that capture the emotional genesis of this family’s shift from enjoying Alice as the healthy matriarch with squabbling adult offspring, to the necessitation of getting real—real fast.  Perhaps though, the pragmatics surrounding Alzheimer’s is another book.

Instead, Still Alice commiserates with the human condition in a similar way to what community does.  After Alice’s diagnosis and when she’s still highly functioning, she builds community through both in-person and online connections with other early-onset patients.  Connections and the notion of relying on community are an overarching theme of the book, beginning with Alice’s connection to academia, and then the conflicted connectedness of her family, then the community connection built between fellow patients, and finally the most important connection being the communion between Alice and her daughter when the disease puts past offenses properly in perspective.  This is why I not only recommend you read the book, but use it to connect with a loved one.

As is usually the case, you should read the book first—the audio version is available and narrated by the author—then if you feel inclined, view the movie.  In the movie, actor Julianne Moore who plays Alice, is especially convincing, but the whole cast is stellar despite the impetus for some of their interactions getting lost through the medium.  That is, the movie simply doesn’t allow each of the relationship backstories to adequately unfold and with that a lot of the experience of how the disease affects Alice’s psyche is lost. 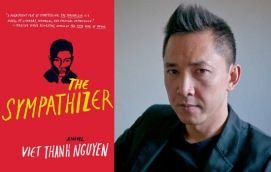 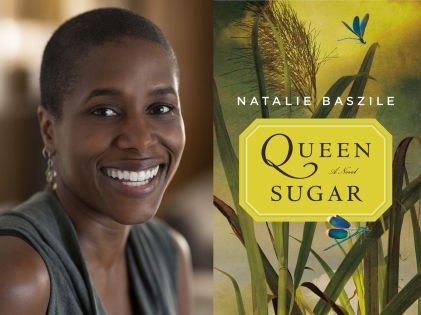